In Those Days: A Diplomat Remembers (Adst-Dacor Diplomats and Diplomacy Series)

We were grateful that our kids were safely home in college and boarding school, respectively. My Kinshasa job would not be available for months after we got there. I argued that I was being forced to be on leave without pay; at least I could work on my tan. But word came back that we would have an apartment—without swimming pool—right in the middle of town.

Well, yes, I could. The Department promptly offered me a job in Nairobi, Kenya, as acting chief of the consular section. It was enormous fun while it lasted, but within a few months I was back in Kinshasa, ready to report for work as protocol officer in the political section. I was not really looking forward to it. I had by then become comfortable doing consular work, first in Brussels and then in Nairobi, and felt competent at it.

But now, I realized, as a new, untrained political officer, I was back in kindergarten again. This is not an unusual experience for junior and mid-level career diplomats, I would learn. In the late s, when John started his diplomatic career, Foreign Service officers usually received language and area training for their new assignments, sometimes including a year of graduate school at a top university. The officer was then expected to hone that expertise during the bulk of what remained of his or her career.

But by the time I joined, fifteen years later, in the Kissinger era, that policy had changed somewhat. The new rules were that officers should expect at least once every eight or so years to be uprooted from a place where they had expertise and made to serve somewhere else. The theory was that this would keep us from becoming too emotionally committed to a favorite area or country and would also give diplomats serving in hardship posts a fairer share of life in the fleshpots of Europe.

I felt ready to kick and scream like a spoiled child at what I saw as a squandering of our hard-won knowledge and contacts.

If they had wanted us to leave Europe after six straight years, fair enough. John had been a diplomat there while I had been his wife and diplomatic hostess during six fascinating years. We both spoke Indonesian and Malay and were more than willing to learn Thai or even Burmese. Still, I had to concede in fairness to the State Department, we had always said our highest priority as a tandem couple was to be assigned together.

And State had managed—just—to find jobs for both of us in Kinshasa. Although Kinshasa was then often referred to as the second worst hell hole in Africa after Lagos, Nigeria , John would have a good job there. My job, however, was an entry-level job, two grades below my then low rank; it was not even in my career specialty, consular work. Not much, he said frankly.

You then get to carry his suitcase to and from the airplane. I felt my worst fears for this assignment had been confirmed. Trying not to sound too negative, I asked if there was anything else I could do.

He paused and then said, John tells me you can write. The person you are replacing, a very nice young man, cannot.

Maybe you could already help by turning his newest effort at drafting a cable into something we can send to Washington. John had always claimed to me that my writing would be an asset in diplomacy. Well, now I would see if it was. There was no way I could edit this in a quick and discreet way so as not to embarrass the drafter—who was a nice young man of considerable cultivation, despite his awkwardness with a pen. It was clear that he had spent many hours on this long, convoluted message, with lots of repeated bits.

It was as if which seemed likely he had tried putting sentences and the odd paragraph first in one place and then in another, and forgot to remove them from their earlier position. In the privacy of the file room, taking scissors, I cut the cable into several segments and removed the redundant text.

After putting the stray sentences into what looked to be the right paragraphs, and the paragraphs into an order that seemed to make sense, I retyped them in that order. I edited, as I went, conserving as much of his wording as I could. Seeing the horrified look on his face when he picked up the new draft, I hastened to say: You remember those hilarious advertisements for cheap records of the classics?


Well, that is all I did here. This is still your text, your cable. At this point fate intervened in the form of a wonderfully helpful colleague, Harlan Robby Robinson. Unlike most of the rest of us, including me, Robby spoke flawless French. He also knew a lot about Africa, including the Congo, from previous study.

Also, he had already been in this job for two years and had extended for a third year. He came over and said, "Judy, if you have nothing better to do, I suggest you accompany a friend of mine, David Gould, who has just turned up. He is going out to the University of Kinshasa where he has lots of interesting Congolese friends on the faculty you could meet. I should have thought of it myself.

Go ahead! Given the much stronger centripetal forces in embassies nowadays, I doubt that any boss now would have let me out of the embassy in the company of somebody not on his staff on my second day in the office. As it happened, nothing could have been a better introduction for me to some of the smartest and kindest Congolese in Kinshasa than being passed on to them by Professor Gould.

Gould was a man they all admired and whom they would mourn when, some years later, he was killed in the Lockerbie air crash tragedy.

I already knew that the Zairian government their employer tried to discourage contacts with American diplomats. For this reason, some of my embassy colleagues tried to prepare me for a disappointing turnout at my party, but almost all the professors and wives I invited came. Our guests enjoyed the spectacular view from our terrace of the widest part of the Congo River, just where the rapids start to push the river feet downward and nearly a hundred miles westward to the Atlantic Ocean.

I came to realize only later, when my work portfolio changed, that one of the biggest pluses of where John and I lived was that it was in a big apartment building occupied by many Congolese and other VIPs. I was finding to my surprise and delight that being a woman was not a handicap to being a diplomat in the Congo. One of my new Congolese friends pointed out that people could recognize me because I was wearing a skirt, whereas many Congolese had difficulty distinguishing one white face from another. Indeed, the only problems I had as a woman diplomat in the Congo came from within my own embassy.

The ambassador was a career officer but a rather conventional kind of man and had evidently not been raised by a mother like mine. He grudgingly confessed that he felt uncomfortable about having the wife of his economic counselor getting up in the middle of the night to meet his plane and carry his suitcases.

Knowing that John did not share his views, I had my answer ready: How do you think it makes me feel—or, for that matter, the poor guy who has to get up in the night to do my job—that you are not letting me do what I am assigned to do? Fortunately, I got on well with my boss, Bob Remole, who came from the mountains of the Far West and was more devoted to Save the Planet, World Wildlife Fund, and Amnesty International issues than to the conduct of traditional foreign policy.

Remole was upset that our government was, for Cold War reasons, on such supportive terms with President Mobutu, a half-educated, charismatic African dictator. I did not then know—though I suspected—the big role of the CIA in putting him in power and keeping him there. Mobutu was notorious for his own corrupt acts and for encouraging corruption by his government. The rot ran from the top ministers on down to the cop on the beat, the soldier on patrol, even the prison guard.

This action might not be possible to undo. Are you sure you want to continue? Upload Sign In Join. Save For Later. Create a List. Summary Judith M. Read on the Scribd mobile app Download the free Scribd mobile app to read anytime, anywhere. Classification: LCC E H A3 DDC White Contents List of Illustrations Prologue 1. Political Apprenticeship in Africa 2.

After serving in the first US liaison office in Beijing, Platt went on to a long and distinguished diplomatic career that included stints as ambassador to the Philippines and Pakistan. He will discuss his China experiences in an onstage conversation with Dr. A book sale and signing will follow. Admission is free. This event is held in partnership with St. Thomas University's Center for International Studies.

China Boys: How U. By Nicholas Platt. Availability: Not On Our Shelves. In Those Days: A Diplomat Remembers (Adst-Dacor Diplomats and Diplomacy Series) 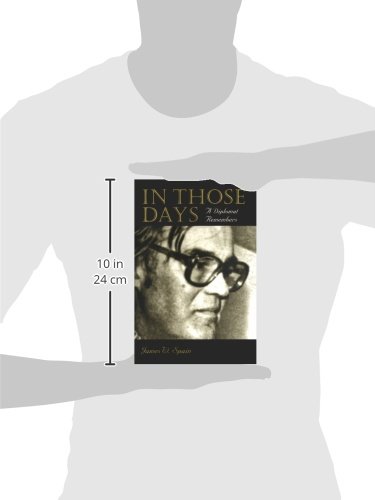 Related In Those Days: A Diplomat Remembers (Adst-Dacor Diplomats and Diplomacy Series)